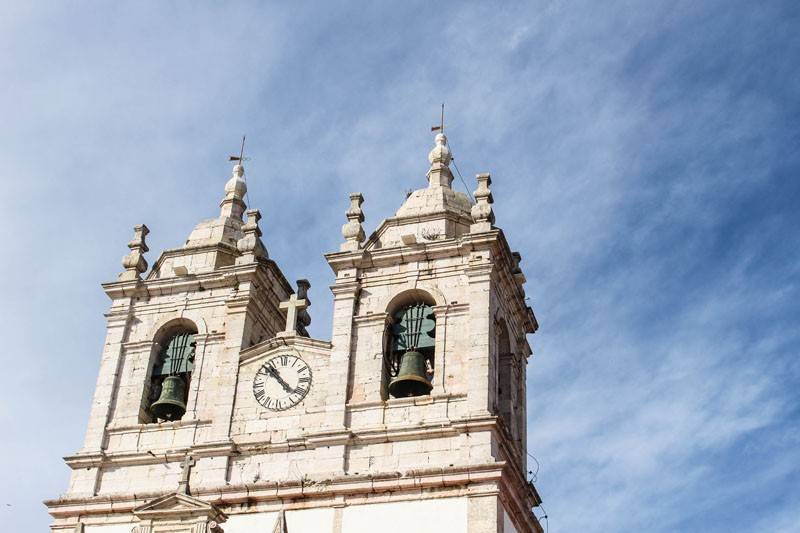 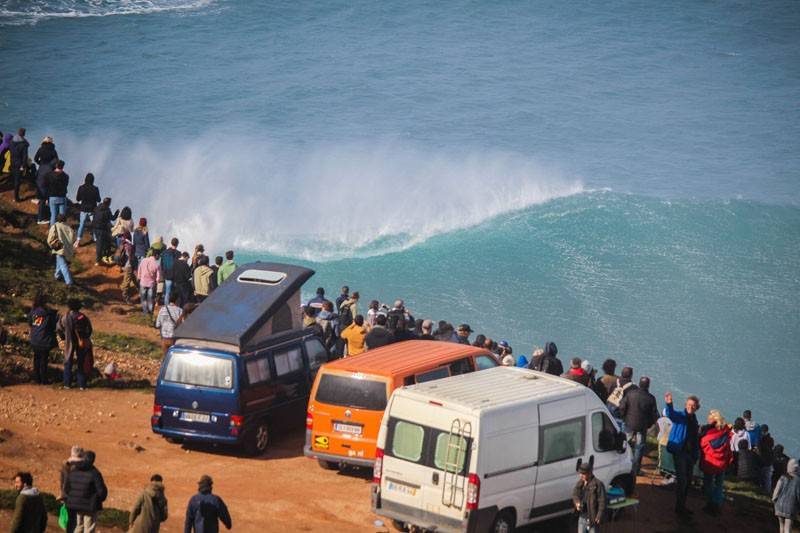 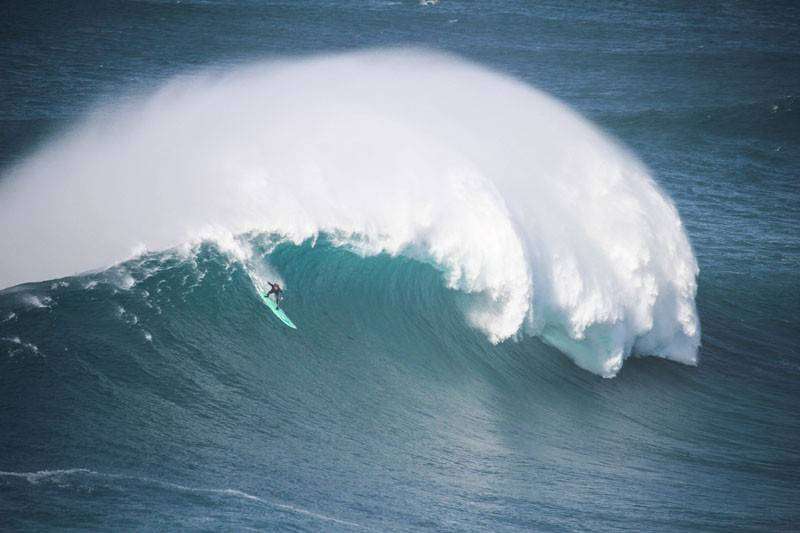 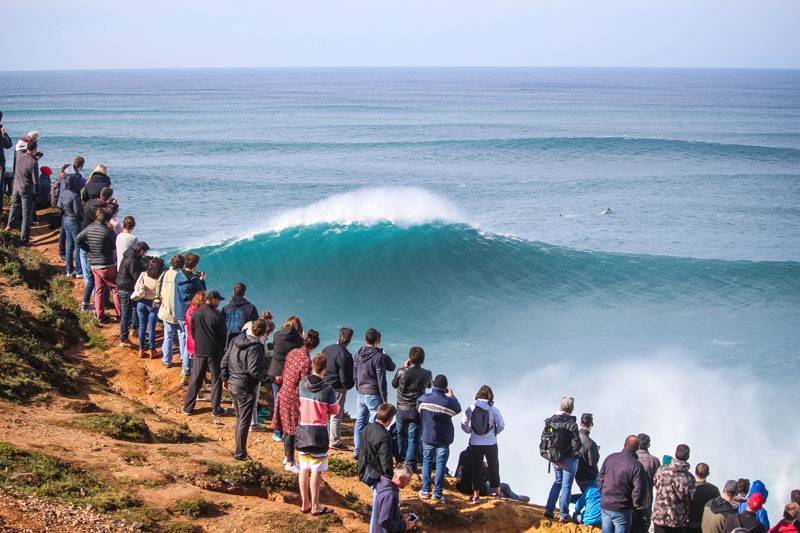 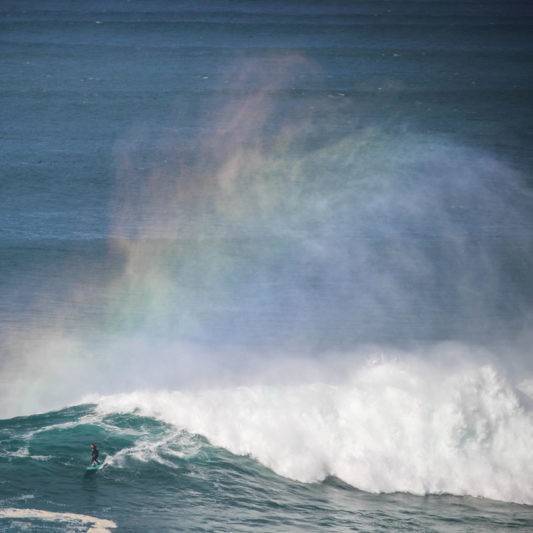 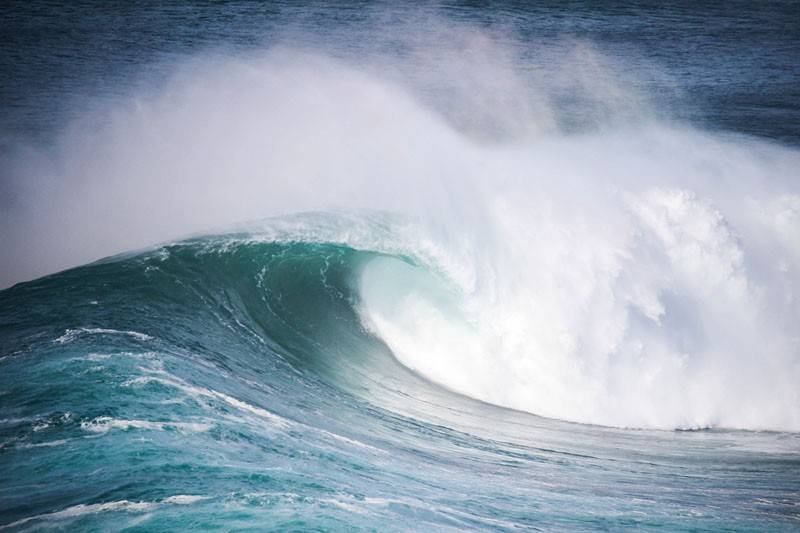 In the week preceding our October bodyboard holiday, the infamous Praia do Norte in Nazare was getting a whole lot of media attention. The APB and the world’s best bodyboarders had just left town, the waiting period for the BWT’s (Big Wave Tour) event had just began, and the first big swell of the winter was winging its way toward this well known Portuguese fishing town, with Garrett McNamara claiming “records could be broken this weekend!”

Normally on our bodyboard holidays there is little leeway for anything but eating, sleeping and bodyboarding. However, with an imminent giant swell coinciding with light offshore winds, sunny weather and the arrival of our group of 14 bodyboarders from 8 different countries, it was a once in a lifetime opportunity not to be missed. So we decided, for one day only, to leave the boards at home and head to Nazare!

The swell was forecast to peak early Monday morning, and so we were up with the sparrows and on the road in the dark for the 1hour 45-minute trip north. To view these monstrous mountains of water you in fact have to head to the small neighbourhood of Sitio. Located on a rocky promontory 100m above the town of Nazare on the one side and Praia do Norte on the other. We parked in the centre of Sitio, where the local ladies famed for wearing seven skirts sell small bags of nuts and dried fruit to tourists in front of the grandiose Nossa Senhora da Nazare Church, whose origins are closely connected to the miraculous appearance of the Virgin Mary in 1182.

From the fabled church, it’s a short stroll down the hill toward the iconic fort and lighthouse that overlook this big wave Mecca, and location of Mr McNamara’s record-breaking 100ft wave. It was when walking down the hill and seeing Sebastian Steudtner get whipped into one of the biggest waves of the day, that it really dawned on me that this was indeed a once in a lifetime experience. I have lived in Portugal for ten years and travelled the world searching waves, but have never been so captivated by the ocean as I was on Monday. The walk down quickly turned into a jog and then a run as another hellman was towed into a widow maker set. It was truly mesmerising spending the day watching these guys getting towed into or paddling these ferocious beasts. The raw power of the sea combined with fearless and calculated wave riding gave rise to an awe inspiring and humbling experience.

Many others had made the trip to Nazare to watch the first competitive waves of the BWT, but despite the numbers of spectators, finding a place to watch the action was relatively easy. In fact, one can move around freely and experiment with different angles to see the action unfold. You can stand atop the cliff, trek down to the shoreline, take the rickety fisherman’s steps to the foot of the cliff or for 1 euro enter the fort and view the action from its rooftop.
The vibe among the crowd was electric, with choral hoots, whistles and winces as a rider either outrun or was run over by the avalanches of white water bearing down on them at breakneck speeds.

So how and why does Nazare get so big? The size of the waves was triggered by a storm off the coast of Bilbao but it’s Nazare’s rare undersea geography; a deep canyon that points like an arrow toward the town is what creates the perfect conditions for the kind of waves seen on Monday. Normally, as open ocean swell approaches the coastline it is slowed down by the ocean bottom as it gets shallower. However, at Nazare the swell’s energy is magnified through this deep submarine canyon before suddenly hitting the shallow waters of the shoreline, giving rise to the record-breaking waves. According to the Portuguese Hydrographic Office, at its deepest, the Nazare Canyon is some 16,000 feet from the ocean’s surface. In contrast, the Grand Canyon is just 6,000 feet deep at its lowest point.

If seeing the big waves at Nazare is on your bucket list, then join us on one of our Portugal trips (May, September or October). We will certainly be heading up there again if the conditions look good. In the meantime, follow the action the on www.worldsurfleague.com/events/2016/mbwt. The waiting period for the BWT event goes on until the 18th February.