Shortly after our first bodyboard holiday in Portugal last October we posted “4 beach breaks that will blow your mind”.  Well one year on, two more trips under our belts and a little help from a local bodyboarder, we have surfed and unearthed 5 more gems all within 1 hour of the “boogie house”. 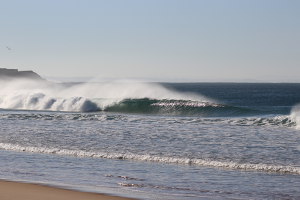 Regarded as one of the best beach breaks in the world, this spot needs little introduction. It is no coincidence that the WSL (World Surfing League) have been coming back year after year and scoring epic waves. Many of the top 44 regard this as one of their favourite stops on tour.

From October through to May, Supertubes does exactly what it says on the tin, serving up mechanical 3ft – 8ft barrels at least 3 – 4 times a week.  Famed for its flawless left hand barrels, it makes the perfect spot to help our bodyboarders develop the lines they draw, scooping under the lip and barrel riding. Unbeknown to most, Supertubes also offers short but intense right-handers with bowly air sections which have been popular amongst some of our progressive riders practicing inverts and rolls.

Despite the recent media attention the WSL has drawn to Supertubes, it is still not uncommon to surf with just half a dozen guys if you are up early on a weekday. 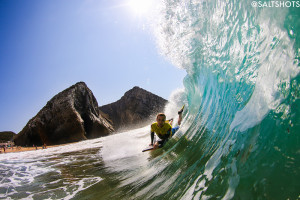 Adraga is considered one of the 20 best European beaches by the Sunday Times newspaper, and lays claim to being the most Westerly beach in mainland Europe.

This idyllic craggy cove is home to a fickle and often uncrowded wedge.  When it’s on here, it is as good as left-hand wedges get. The beach is also a swell magnet and was a saving grace on our last trip; even when Praia de Norte (Nazare) was flat, Adraga was serving up super fun 2ft triangles. This wave was a big hit with the crew last week. Not only were they able to perfect their rolls, clock up some tube time, but there is little or no paddle out as it breaks so close to the shore. What’s more, the shore break nature of this spot, the unique light and jaw-dropping backdrop make it an epic spot for water photography. Everyone on last week’s bodyboard holiday went home with a hat full of sick water shots. 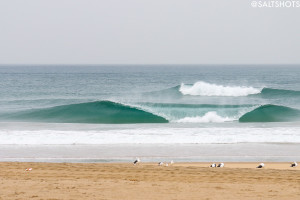 Translating to “small beach”, Praia Pequena is often overshadowed by her neighbouring big and more famous sister Praia Grande or “Big beach”. Praia Pequena is in fact the complete opposite, it is a small cove with restricted access and nothing in the way of shops or cafes, and a crowd that rarely exceeds ten guys. This beach is known for it’s wedgy right and left hand peaks that work best at 2-4ft on a pushing tide. These wedgy peaks provide an assortment of air bowls, rippable walls and racey tubes. Until now it has been unsurfed on our bodyboard holidays, however our guide and local bodyboarder swears by it, describing it as a bodyboarding skatepark when the banks are good. 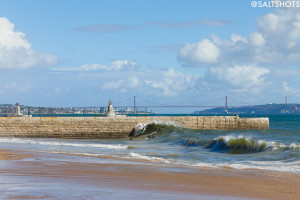 If bodyboarders could design the perfect bodyboarding wave they would create something that looks much like Paco d’Arcos, a perfect left-hand wedge that refracts symmetrically off a long harbour wall into small white sandy beach. It’s not about whether you’ll air but how high. A popular spot for Lisbon’s bodyboarders for it’s air sections, wide barrels and dry hair paddle out. It really is surfing made easy. Also, since the waves break so close to the shore it makes a great place for land and water photography. The proximity to Lisbon’s port it gives rise to a surreal surf experience with cruise ships and container ships passing just a stone’s throw away. The beach also hosts a trendy café, which is the perfect place to kick back with a coffee and watch all the action go down. 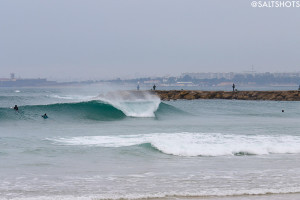 It is no coincidence that Pierre Louis Costes gave up his life in Hossegor and relocated to Costa da Caparica. Located just over the river from Lisbon, Costa da Caparica boasts 8km of golden sandy beaches divided up by a series of rock groynes. It is these rock groynes that provide a wide variety of wave types for all levels. What’s more, the sandbars are constantly changing which means an empty peak can always be found. On a recent trip over the river we surfed a hollow right-hander in the morning and a wedgy shore break in the afternoon, and on both occasions all to ourselves. The former provided excellent practice for tube riding and el rollos, while the latter was a great opportunity for the guys to practice 360s, reverses and cutbacks.

Fancy sampling these breaks for yourself? Check out our trips to Portugal in May, September and October.